This is a plugin for MCE Controller by Charlie Kindel (https://tig.github.io/mcec/). In addition, I am including a helper server I wrote that provides a trackpad-like mouse interface that also sends commands to MCEC. In combination, this allows you to have a fully-functional, network-based keyboard and mouse for a HTPC available in Home Remote.

The MCEC plugin supports two Settings: Host and Port. Host should be the hostname/IP address of the computer running MCEC and Port will default to 5150, MCEC’s default port.

I know others have written plugins that interface with MCEC for fairly specific use cases. This plugin is different in that it is intended to be general-purpose and could, in theory, be used (hopefully without any modification) for any situation. It supports a very large number of MediaCommands, most of which are self-explanatory. The general groupings are: standard Home Remote MediaCommands (basic navigation and simple numbers); modifier commands (for controlling shift/control/alt/win keys), key commands (corresponding to keys on the keyboard, which can be impacted by the modifier keys, such as upper casing and non-alphanumeric symbols), and mouse commands (just various mouse button inputs–these are useful in combination with the mouse helper server discussed below). The modifier and key commands are prefixed with “Letter”, such as LetterShiftOn and LetterA. The mouse commands are prefixed with “Mouse”, such as MouseLeftClick.

In addition, there is a special MediaCommand that will pass any command through to MCEC. You send this by prefixing the MCEC command with “MCEC:”. So, for example, sending the MediaCommand MCEC:chars:Test! would send MCEC the chars:Test! command.

One thing to be aware of that could be a little tricky is that my initial use case was to simulate a keyboard. Thus, the commands are structured to send what the key-presses are, and not what would be typed on the screen. To give an example, to type an exclamation point ("!"), you would, as on an actual keyboard, first turn on the shift with LetterShiftOn and then hit the “1” key with Letter1. You’d probably then want to turn off the shift with LetterShiftOff. I ended up taking this approach for two reasons: (1) it translates pretty well to my use case and (2) more critically, it is actually very difficult to, in a general purpose way, send specific values to be typed rather than the corresponding key to be pressed due to the way MCEC works. That said, I did originally intend to make commands such as LetterCapitalA and LetterExclamationPoint that would always type a capital “A” and “!”, for example. So, there is the beginnings of a framework to support such commands in the plugin, and if there is interest, I would be willing to extend it further to support that behavior as well, to the extent possible. Lastly, the plugin is written for key presses on a standard US keyboard layout. It is possible there are some key mappings that would have to change for other layouts. I’d be happy to share what I know if someone has a need along those lines.

Regarding the mouse helper interface, this is something I wrote back when I was using iRule. It is unchanged since then and still works great for me. I wanted to preserve it here and provide it in case it would be helpful to others. It is basically a very simple web server that serves up a single web page. The web page uses a library to detect various touch interactions and sends those to the server via a websocket. The server opens a connection to MCEC to pass through the commands from the web page to MCEC. You would run it on the same machine as MCEC is running on. In Home Remote, you just use a WebBrowser control to load the web page and then use it as a touch pad to control the mouse on the HTPC via MCEC’s mouse support. Assuming the Home Remote app and your device support it, the webpage supports single/double left click with a single/double tap and single/double right click with a single/double two-finger tap (and maybe a few other things, it’s been a long time since I’ve dug through the code). In addition, a scroll region is provided which lets you scroll a page up or down. I find it fairly intuitive, but please let me know if you have questions. In the interest of full disclosure, this concept was based on something someone named “Steve” posted to the iRule forum. I ended up re-writing the whole thing to get it to work on my setup.

Here is a screenshot of the keyboard and mouse interface I use for my theater remote: 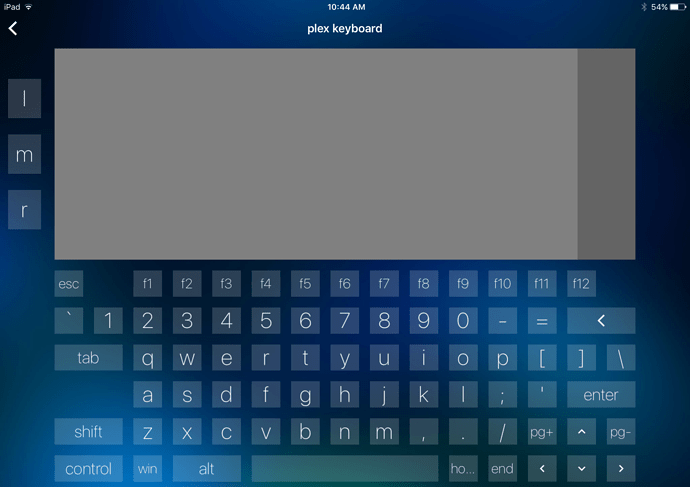 When combined, you get a handy network-based keyboard and mouse which is nice for doing various tasks on your HTPC, including general maintenance and setup, and you don’t have the problem of a wireless/Bluetooth keyboard not having enough range to work reliably. One last thing, though: certain Windows prompts (the admin/UAC ones) will not respond to MCEC’s virtual mouse, so you’ll sadly still need to get out of your chair for a wireless keyboard on those rare occasions they pop up.

Here is an .hrp file with a sample Keyboard Control that uses the defined MediaCommands. It is set up to be used in a DeviceBrowser control. As-is, the shift, control, and alt keys change the background color when selected/unselected. You may want to alter the PropertActions in their respective EventTriggers to fit your theme more.
KeyboardControl.hrp (95.1 KB)

To be clear, the MCE Controller plugin you wrote… executes the keystrokes and mouse input on the same computer which is running MCE, right? I mean, lets say you have a computer \Plex which is running Plex Server and has access to your media library. This plugin would let you virtually type (e.g. to search for a title) on \Plex. On the other hand, it would not, for example, let you send keystrokes to another device, such as an Apple TV or a Roku. Is that correct?

If I understand correctly, then I believe the answer to your question is “yes”. The MCE plugin opens a connection to the MCE Controller (MCEC) server that is running on whichever computer you want the input to be received on. To slightly clarify your example, if you have a HTPC that is running some kind of Plex client (Plex Home Theater, Plex Media Player, Plex for Windows, etc) (which may be the same computer as the one running the Plex Media Server, but it doesn’t have to be), then you would run MCEC on the HTPC in server mode and the MCE plugin would connect to it and let you send the keyboard commands as if you were typing on the HTPC directly.

Similarly, if you were to also run the MouseHelper on the the HTPC, it would also connect the the MCEC server and provide a webpage (that you can open via a WebBrowser control in Home Remote) that acts as a trackpad to send mouse commands to the HTPC also as if you were using its mouse directly.

The MCE plugin (or the MCE Controller itself) cannot send keystrokes to another device like an Apple TV or Roku. Instead, you would want to use a plugin that can talk to those devices to send them keystrokes. I have also written a Roku plugin that supports sending keyboard commands (for this very use case): Roku (HFN) Plugin

In order to avoid having to create multiple keyboards to use with these different devices, I made sure that the MediaCommand names for sending the keyboard characters were the same between them. I then created a Keyboard page that I embedded in different pages via a Device Browser control so that the MediaCommands were sent to the correct device without having to customize the keyboards: 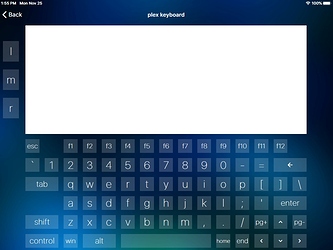 So I hope that clarifies things for you, but if not, please let me know–I’m happy to help!

A couple of quick additional notes: First, the screenshot of the Plex Keyboard above doesn’t show the MouseHelper webpage correctly because I brought it up in the simulator which cannot normally talk to my HTPC (on a different network)–it normally looks like the screenshot in the original post.

Second, MCE Controller/Windows have some limitations that I have encountered, but managed to work around most of the time. For example, if a User Account Control (UAC) window pops up, Windows will not accept inputs from MCEC’s virtual keyboard (I’m guessing for security reasons), so the plugin and MouseHelper’s inputs will be ignored while it is on screen. This mostly comes up when software (such as PMP) needs to installed/updated and I have a separate bluetooth keyboard I use on those occasions (with much aggravation). If there are other situations where Windows is ignoring the virtual keyboard inputs of MCEC, the plugin/MouseHelper won’t work, but that is a limitation of MCEC/Windows and not the plugin/MouseHelper. I think the only places I’ve encountered it is in the UAC prompts and possibly when applications running as Administrator have focus.

I don’t use the Windows HR app, but my first guess would be it could be an issue with the windows firewall blocking the loopback connection for the HR app for some reason. I’m not much of a windows networking expert, but I know that every time the HR Designer updates I get prompted by the Windows firewall to allow connections to private/local networks, maybe it’s a similar thing you need to allow for the HR app?

Thanks and yes, digging in to it, it seems to be a firewall issue(from the firewall logs its dropping the connection request packet to MCEC). However, I’ve tried turning off the firewall for the private connection and the issue still exists. Now delving down in to deeper firewall filtering rules. I have looked at the app permissions in the firewall configuration, and both designer and the full client seemed to be allowed.

As I noted, I’m not at all proficient with Window’s Firewall–is it possible your local network is actually configured as a public one (in poking around, I noticed that is how mine is configured; I had no idea) and that is the kind you have to allow connections for? The only other thing I can think of at the moment is the standard Windows solution: try rebooting

Sorry I can’t be more help, but maybe someone with more Windows skills than I will be able to provide some insights.

Thanks again, appreciate the suggestions. Tried turning off firewall on all networks, private, public and domain- same. Tried rebooting, uninstalling and reinstalling the app. No luck. I suspect there is something deep in windows firewall that cant be turned off and seems to be causing the issue.