Turn on display (android) on motion 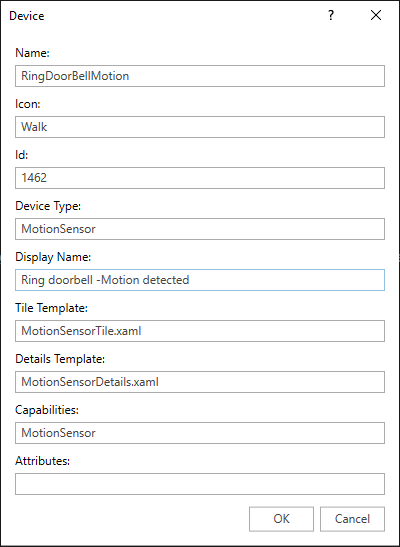 develop internal blackscreen saver (forum examples from Bill), but Idle event based on the touch.
so if I turn on display by motion - I can’t reset Idle event. I should turn off screen also, from my code.
more than. if i trying to bind Idle (ha-ha-ha) to False, it’s ignored

Any device Binding can trigger a Scene. So you can replace that Idle binding with a binding to your Motion attribute.

last question for today.
I have two old tabs =)
ground floor and upstairs.
how I can identity devices?
so I want what app works only with own motion sensor. how I can setup / configure / bind

Tnx. have a nice weekend

How can you identify your tablets?

There isn’t really any tablet identification in Home Remote. Projects are meant to be universal, designed to work on all. The HRP should work on any device so long as they are Android 5.0 or newer.

How can you identify your tablets?

OK, I see. There currently isn’t any way to add a condition to the trigger that checks the model number or id of the tablet. For this scenario you probably will have to create unique HRP files for each. This is probably a feature that could probably be added though.

… or create a local manual config override. as i can understand we haven’t local persistent where i can store something…
idk how, but will do.

Correct. Neither are currently possible. That’s another option I can look into.

You can use an app called Fully Kiosk and it uses the built in tablet camera as the motion sensor. It can then turn the display on with motion and I believe it can receive HTTP commands to wake the tablet up, otherwise using Tasker you can get a similar result.

I think it could be possible to detect the internal front cam, right? It should be the same for all Android versions, I think so.

Would be really great to detect the motion from this cam for deactivate the blackscreen saver.
(yes,… I’m also an “old” ImperiHome user - there it was possible

Possibly. I can look into it.

I am using Tasker on all my Android tablets and something called TNES.

Its a little web server for Tasker, so you can send in different HTTP commands to the tablet to have a tasker task run e.g. wake up the tablet.

Another option is to use the camera on the tablet as the “motion sensor” there is an app called Motion Detector which works with Tasker and upon the tablets camera detecting motion you can have tasker watch for an intent happening and then run your task to wake up the tablets screen etc.

Side node: Imperihome had its own web server and simple HTTP API for controlling aspects of the Imperihome app, whereas Home Remote does not. Which is why I had to find a solution that gave me similar functionality to what I had with Imperihome previously.

We did ask @bill for some of these Imperihome type features, but I don’t think they have been implemented as yet.

no i can`t.
it’s the old 5.1 no-rooted ZipaTile-1 tab with old Cyanogen mod 12 with old WebView (can’t update).
any WebViews running on this tab:

btw, this ZipaTile-1 natively support motion and many other things