Are "Virtual Device Variables" and "On Change" Still Supported?

Today, with the current version of HR, it seems my Virtual Device variable is still triggering a script (I see my mqtt updating) but I cannot find the script anywhere. 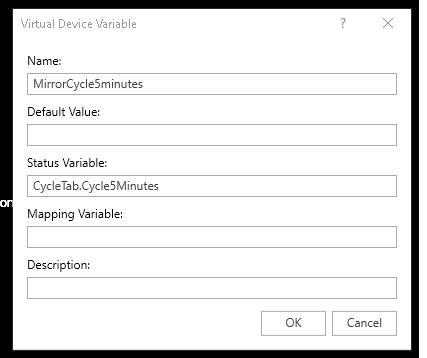 They are still supported. If you enable the “Is Legacy” Advanced Setting you should be able to see & edit those scripts.

Going forward it’s recommended that you use Scenes instead of ValueChanged.

There’s a new Scenes feature in the 3.10.0 release. The same sets of “Actions” that were previously only available to XAML pages can now be created outside of that context in a convenient folder. These scenes can be triggered to run either manually or automatically. 1. Manual You can create buttons or device tiles that execute scenes. Scenes are much like device objects, they can be assigned both a TileTemplate & a DetailsTemplate. In terms of control, they are all automatically given the Sc…

That did the trick (checking Legacy). Made my changes and then unchecked it again and saved the project. Regarding “Scenes”, I still have not got to where I fully understand how and where to use them. I will go back and look at the example and see if I can migrate my needs over to that.

Thanks for the quick response.