How to highlight the clicked button?

I have a set of 10 “normal buttons” that I use to control different TV fonctions (Netflix, Plex, Disney, favorite channels…). I would like to highlight the button when it is clicked (and un-highlight the other ones).

I have used a GridView below my buttons and an action script on button clicked to set the gridview SelectedValue "MyGridview.SelectedValue = “Netflix”.

That works but I was interested to have a more fancy highlight, using the button border. I have seen a solution in John’s Page Browsers video tutorial but that solution does not scale well with 10 buttons. Is there a better solution?

The ideal control for this is either the GridView or RadioButton. To get this working with 10 regular buttons will get kind of messy. There isn’t anyway around that. A “scalable solution” for you will likely require some future enhancements, either by:

If I understand correctly, I think I did something similar (after also coming to the conclusion that the approach in John’s Page Browsers video was not scalable). I have a “diagnostics” page in my remote that provides access to a lot of less-frequently-used controls for various components of my system and, as part of that, I used a DeviceBrowser to provide navigation and number pad controls for all of the components that support them because it was convenient to have those replicated there as well. In my case, it is 6 different components: 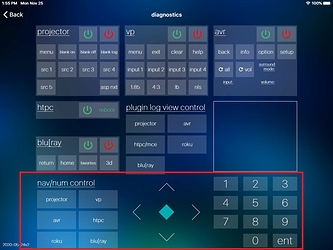 Here’s a couple closeups showing the selection of different buttons (I update the background color to show which one is selected):

The general concept is that I created a “Virtual Device” that I named “Variables” and added a Variable to it called “Diagnostics_NavNum_SelectedDevice”. Then, for each button, I added an EventTrigger that just sets the 2 DeviceBrowsers (navigation and number pad) to the correct Device value (analogous to your GridView SelectedValue, I’m guessing–I’ve never used a GridView) and has a DataAction that sets the variable to a unique string. 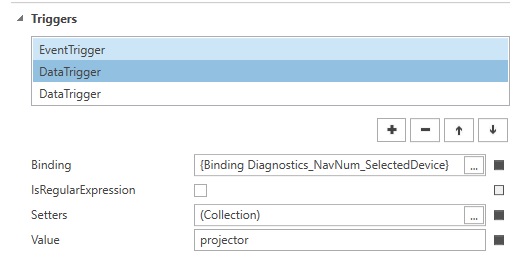 This is pretty scalable if you just copy and paste the buttons, update the DataAction that sets the variable on click, and update the target strings for the 2 DataTriggers. The nice thing about it is that the buttons don’t need to “know” about each other so you can add/remove as many as you want without having to change any of the others.

Hope that helps you get the behavior you’re looking for!

Thanks for this solution. It works great. The regex idea is very clever.

Thanks, glad I could help!