The Alexa Voice Service (AVS) was expanded in the 3.15.0 release to support a new feature called “Voice Shortcuts”. With these, you can save commands you ask regularly & execute them with the click of a button, no microphone required.

The new Voice Shortcuts can be configured in the app itself or the Designer. When you add AVS to the app itself, it will force you to configure at least one of these new shortcuts immediately after linking your Amazon Alexa account. Should you choose to add more commands later, this can be done by going to the Settings screen in the app.

Can responses from Alexa be muted?

Yes. In anticipation that there may be some users who do not care about the response audio, there is a special flag that you can use. When a star * is inserted at the beginning of the Voice Command, the response will be muted.

Can multiple commands be used for a single object? 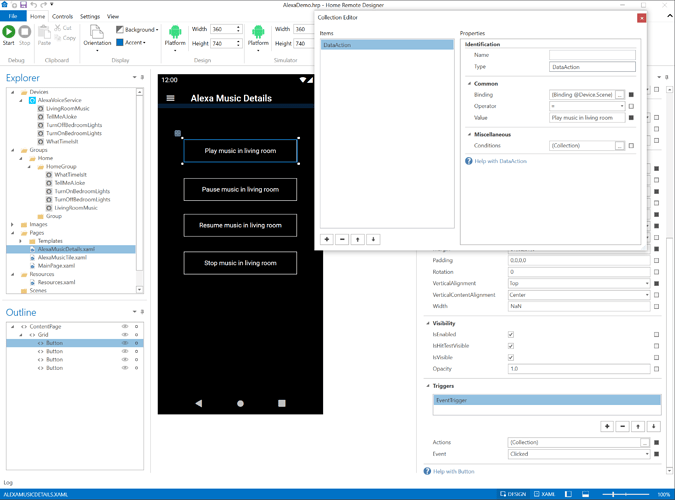 It works I’ve tested it.

Would love to see one for Google Home voice assistant.

@cw-kid weren’t you testing a way to bridge a Vera controller to a EZLO controller. In theory we should be able to use VOI thru Home Remote? I second similar functionality for Google. I would then be able launch apps on my Nvidia shield thru HR scenes and such.

Yes, I have all the devices from my production Vera Plus mapped in to the Ezlo Plus hub as virtual devices.

You could create a scene on the Ezlo Hub to talk to Google Home via VOI and then run that scene from Home Remote.

Can you point me to instruction on the Vera community? Are you just sending HTTP commands to the Ezlo?

I am using the 3rd party Vera to Ezlo bridge plugin here.

However its a little tricky to setup, you will need SSH access to your Ezlo Plus via something like Putty. WinScp for uploading your modified .json file and you will also need access to the Ezlo online api tool to work out the ID strings for your rooms, so you can assign the devices to the correct rooms.

Yes I have ssh in to my vera before. I will check it out.

Thank you for this link with the buttons, I notice that Alexa does not understand everything.
She reacts specially. For example the routine to turn on 2 lamps and turn off 2 lamps, works on the Alexa application.

But in HR, to turn on it’s OK, but to turn off I get: Sorry this device cannot perform this command.

I use to test 2 buttons, 1 for On and 1 for Off because I can’t get the On / Off conditions to work as with real devices with status feedback.
So with 2 buttons + having tested on the Alexa application (it reacts well) I cannot look for more.

You need to enter the exact command you would normally speak to Alexa minus the preceding "Alexa, ". The wake word is not needed. If you cannot get the command to work, I recommend you install the official Alexa app on your mobile device. Try using the “Tap or say Alexa” feature at the very top of their app on the Home tab. If what you say in their app works, the command you type in Home Remote should also work.

I just noticed that if I do questions in English Alexa works, but not in my language. It is independent of HR. This only happens on a certain type of device (Broadlink).

Broadlink indicates that the app is in English only. Maybe there is some meaning with Alexa, I don’t understand, this is the first time I have encountered this. But also Broadlink is new and I had not had the opportunity to try it with Alexa.

EDIT : I just found, English is no accent, and in my language sentence there was no accent on a letter and Alexa absolutely wanted to have one. This was reflected in this manifestation. Everything is working now !

Is there a way to find out what condition the scene was in? When I hit a button and close and open the app, I don’t know if the device is on or off.

I am using the 3rd party Vera to Ezlo bridge plugin here.

However its a little tricky to setup, you will need SSH access to your Ezlo Plus via something like Putty. WinScp for uploading your modified .json file and you will also need access to the Ezlo online api tool to work out the ID strings for your rooms, so you can assign the devices to the correct rooms.

Is this plugin just for mapping devices? What if I wanted to just send a http command to the ezlo to invoke a ezlo scene? Is that possible?

just send a http command to the ezlo to invoke a ezlo scene? Is that possible?

Yes it’s possible I’ll ping you on the Vera forum.

Yes I came across your guide. Unfortunately VOI doe not work as expected for me. Command that work when I talk to my Google home do not work thru a EZLO Scene. My lights work thru GA commands issued through VOI but not commands that are set up in the home app as routines.

Is there a way to find out what condition the scene was in? When I hit a button and close and open the app, I don’t know if the device is on or off.

There is not. These are commands only. There’s no way to to parse the feedback to determine the actual state of an Alexa device.

Is it possible to get alexa to say something based on the state of a variable which could trigger a vera scene linked to the alexa? I was thinking I could have a scene set up in vera that will run which is set for alexa to say something. I wish to use it for my Amcrest doorbell. So far I have the RTSP feed showing on the tablet when the doorbell is pressed (and also my NVR to show the camera on the tvs - this would be a nice addition.

There’s a new Scenes feature in the 3.10.0 release. The same sets of “Actions” that were previously only available to XAML pages can now be created outside of that context in a convenient folder. These scenes can be triggered to run either manually or automatically. 1. Manual You can create buttons or device tiles that execute scenes. Scenes are much like device objects, they can be assigned both a TileTemplate & a DetailsTemplate. In terms of control, they are all automatically given the Sc…

Thanks - I got it working by setting a normal Event Trigger to trigger the Alexa device upon opening the camera grid I have set up - it works and runs the alexa routine that use a dummy vera scene to allow the voice feedback. It doesnt work on my old ipad though - it is IOS 10.3.3 (latest version for it) so I assume this is too old for the AVS, the hrp loads but screen goes white. I even tried loading a compatibel version of alexa on the ipad to see if it was a device authientication problem but it doesnt work.

You will not be able to do this with the automated “text” voice command. You need to add a button that uses a MethodAction to call App.OpenAlexa which will open the dialog that listens for responses. 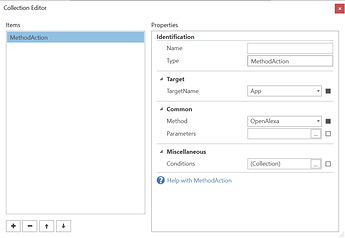